Handsome set-up: how to launch (and build) your very own business. We are very happy to be featured in Monocles’s Entrepreneurs Guide 2013. It discusses set-ups from established brands to new start-ups, bringing you inspiration and advice you need to strike out on your own. Read the article about us below. Buy a copy of the September issue at Monocle store online.

Pictures above by Martin Schgaguler and below by © Aurélien Bergot/whitebalance.ch

PANAMY, Geneva.
Swiss startup Panamy is the brainchild of Martin Schgaguler, 31, who saw an apportunity after trying to buy flowers for his girlfriend. “In shops, cut flowers aren’t very fresh and last just a few days once at home; online, florsits that do home delivery just fight over price. There is no care over how bouquets are presented,” says Schgaguler, former head of design at the ECAL design school in Lausanne.

Tired of makeshift arrangements wrapped in cellophane and string, he devised a smart-looking bouquet out of a simple hatbox. Dressed up in a robin-egg blue with silk ribbon, the container doubles as a vase and can hold up to 30 long-stem flowers. Schgaguler edged out the middleman and has cut flowers delivered directly from farms to his Geneva atelier for wrapping, meaning that his clients receive flowers with a longer shelf life. 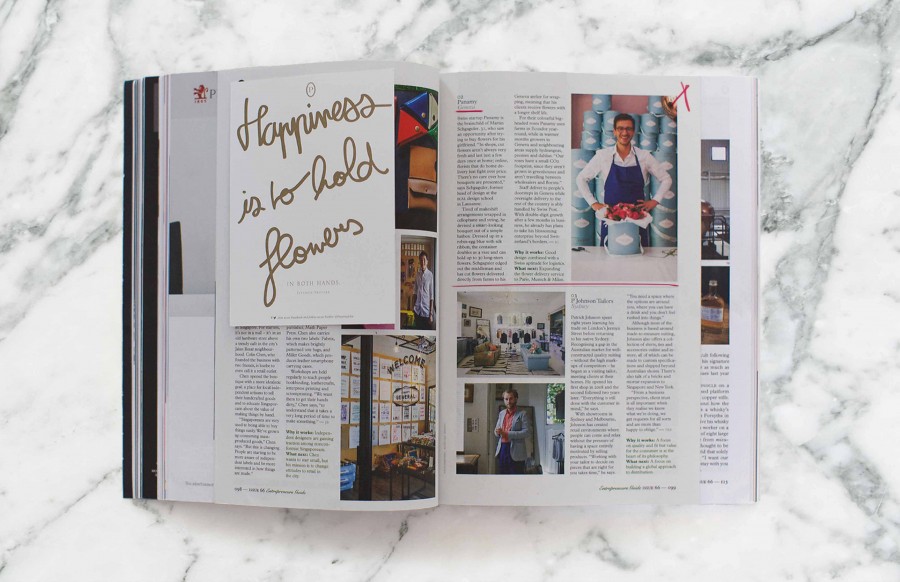 For their colourful big headed Roses Panamy uses farms in Ecuador year-round, while warmer months growers in Geneva and neighbouring areas supply hydrangeas, peonies and dahlias. “Our roses have a small CO2 footprint, since they aren’t grown in greenhouses and aren’t travelling between wholesalers and florists.” Staff deliver to people’s doorstep in Geneva while overnight delivery to the rest of the country is ably handled by Swiss Post. With double-digit growth after a few months in business, he already has plans to take his blossoming enterprise beyond Switzerland’s borders. – IC

Why it works: Good design combined with a Swiss aptitude for logistics.
What next: Expanding the flower delivery service to Paris, Munich & Milan.