We deliver across Switzerland! For next day delivery order before 3pm

Promising immediate sensual beauty. He was one of the last great American painters of the abstract expressionist era. In 2008 a magnificent retrospective at Tate, the artist’s first in 15 years, showed the full range of this remarkable oeuvre. 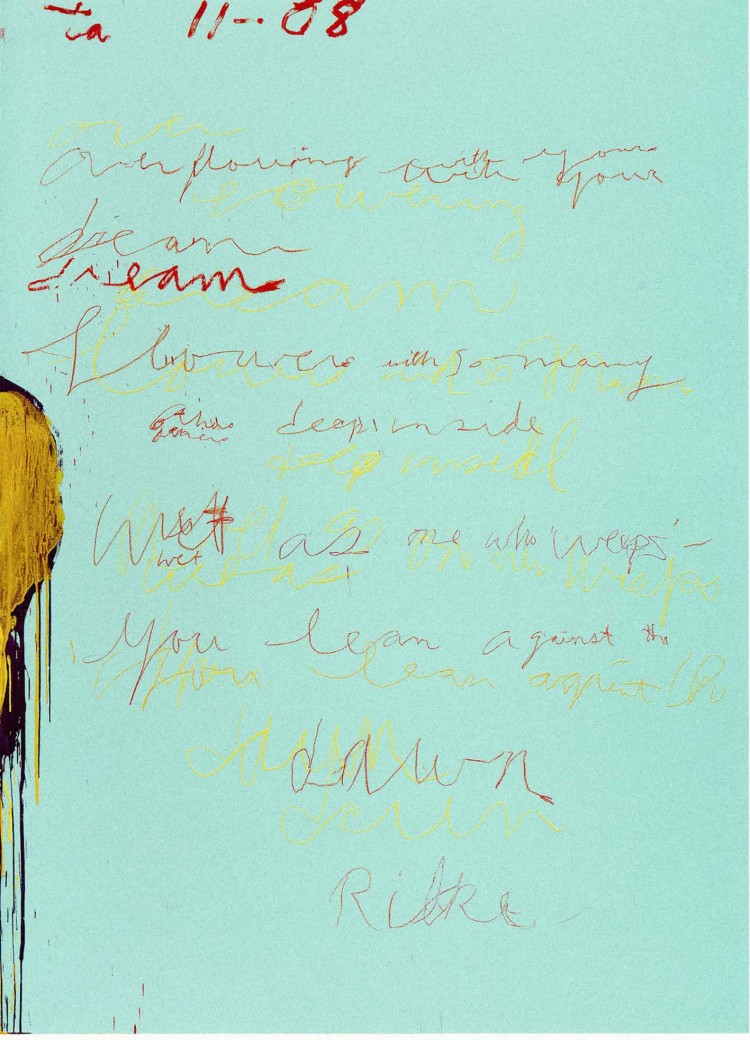 In Cy Twombly’s first major exhibition in the UK since 1987, the most disappointing works are also the most revealing. After several breathtakingly evocative rooms of paintings rippling with life and colour come two rather stilted series of prints – one of peonies, another of tulips – that show precisely the limits of representation that Twombly so thoroughly trounces elsewhere. If these indulgent, sweetly pretty photographs were by anyone else, they would barely warrant a glance. But they are by one of the masters of American painting – an artist who deserves to be a household name in the same way as Jackson Pollock. Twombly, born in Virginia in 1928, is a contemporary of Jasper Johns and Robert Rauschenberg; like them, he tussled with the dominance of abstract expressionism in America as a student and young artist in the late 1940s and early 1950s. In 1952 he was awarded a grant allowing him to travel across Europe and north Africa; for the rest of the decade Twombly divided his time between New York and Rome, gradually moving away from expressionism to develop his own style, finding inspiration in poetry, mythology and the classics and working in increasingly metaphorical and allegorical styles. Since he settled in Italy in 1959, his imagery has drawn heavily on European history and literature. 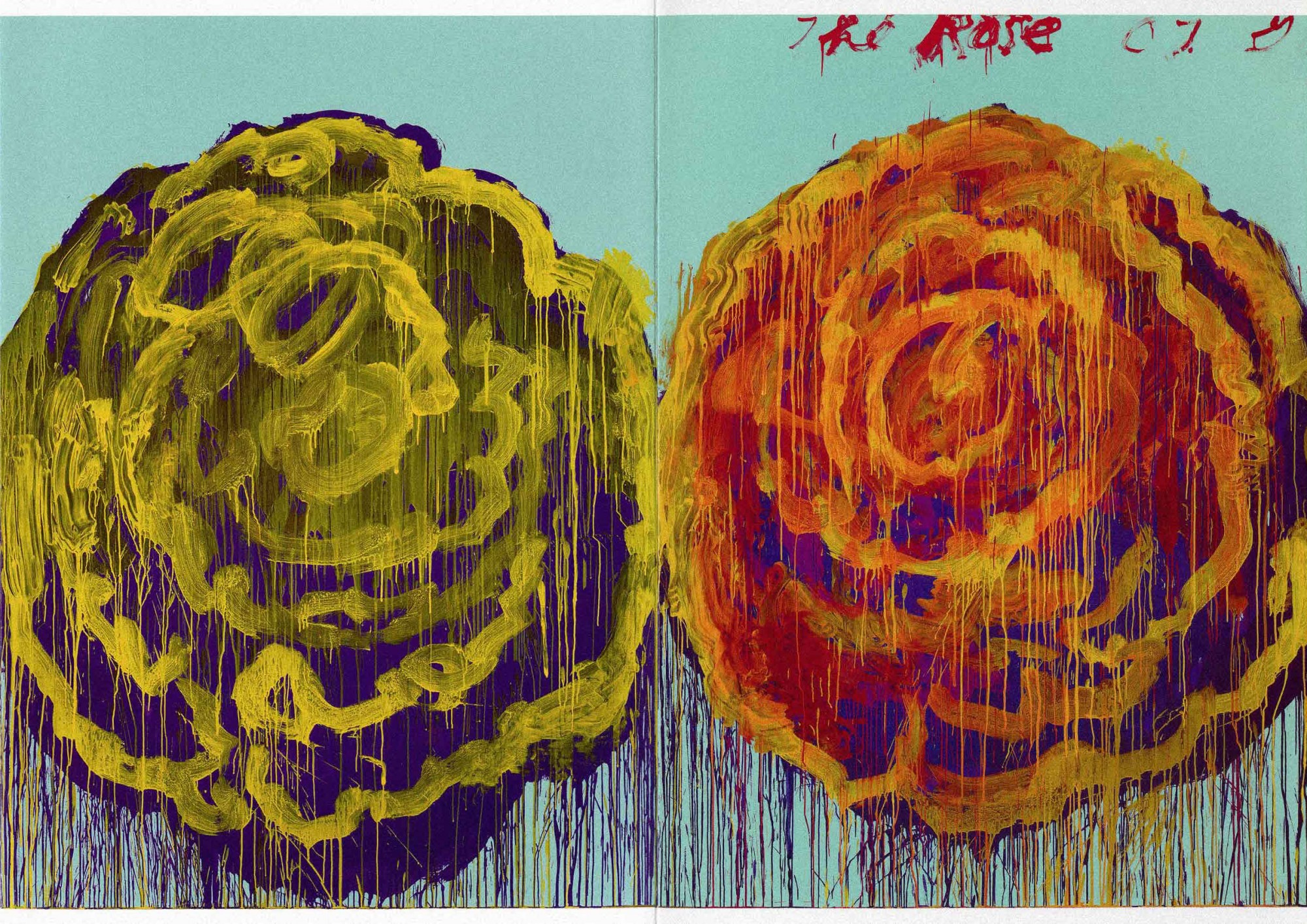 However, there is little sense of that in this floral dance of an exhibition, selected by Twombly from his work over the past two decades and largely concerned with the beauty of bulbs and hardy perennials – a theme suited to this gallery deep in Edinburgh’s Royal Botanic Gardens. In the photographs, the tulips are plump, decadent and blurry; the cream peonies, meanwhile, are so closely scrutinised that they start to echo other things: frills of lingerie, piles of clotted cream, mounds of natural sponges and, against a dark backdrop, the mushroom cloud of a nuclear explosion. What Twombly seems to be getting at is the challenge of capturing the luxurious beauty of these blooms on paper, and how it feels to gaze at such exquisite, fragile loveliness on a warm, serene day.The photographs can’t do more than remind us of that feeling: you can zoom in as close as a lens will go, but there is no guarantee of capturing the essence of things. The paintings, however, are that feeling: they embody wonder at the beauty of the natural world.

This is hardly new territory for artists, and it is a relief that Twombly deconstructs such familiar notions even as he celebrates them. A room full of paintings of irises captures the haughty grandeur of the plant – misty, candyfloss wisps burst with life atop thick, dark stalks like rhubarb – but also find Twombly disrupting the conventions of botanical drawings and images by scrawling “iris” and other half-legible scraps of text in red crayon across the canvas. Twombly worked as a cryptographer in the US army during the 1950s, and it is tempting to read that aspect of his biography in his paintings’ bewildering use of language – place names, repeated words and fragments of other texts. A sculpture of a rose similarly evokes the traditional (a patch of deep pink suggests the flower in full bloom; a haiku notes the fast-fading beauty of the rose) while departing from it. From some angles the work looks like a cream cake designed after a decapitated human body and embellished with a toy cigarette.

Those who have admired Twombly’s work drawing on classical antiquity might think that this exhibition shows a mature artist turning to the relaxed pursuits that suit his advanced age. In fact, the richly involving, largely botanical works explore why and how we represent the natural world. Their dreamily intense colours stretch back to a lost long ago, giving the works a resonance at odds with their scribbled surface and fractured forms. And even as he employs new media – in the graffiti-like scrawls that deface yet deepen his work – Twombly draws on the high art of antique culture.With its 20-year span, the exhibition also traces Twombly’s own relationship to time and space during his career. A number of works record moments in specific places: there are references to the Seychelles; Gaeta, where Twombly has a studio; Rome and, simply “the garden”. Moving to Italy enabled the American painter to work in the kind of summer light that makes the simplest forms otherworldly. The way a flower looks in bright sunlight, or a flamboyant sunset after a hot day: this is what he captures in these elegant, epic and yet gentle works. They may not be as allegorical or intellectually demanding as some of his paintings, but in these explosively colourful, playful, celebratory canvases, Twombly captures something of the life of a rose, an iris, a peony. Rather than a sign that he is going to seed, what we see here is an artist working at the height of his powers.